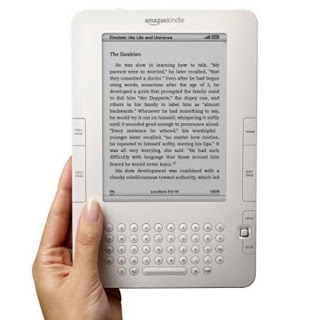 Do you have one yet? Are you going to get one soon?

In my case the answers to these are yes, and no.

As I have mentioned before I have both an iPad and a Kindle. For just the pure reading experience, you're going to have to pry the Kindle out of my hands with a crowbar. The iPad works well, as long as you are indoors.

I actually "prefer" reading books on a Kindle, versus one of those things made out of dead trees, and it's for a very simple reason. Because I read a lot in bed on my side, I hate fighting to keep the dead tree thing open to the right page, and having to shift my hands about while trying to go to the next page. On my Kindle I simply push the button and I'm on the next page. It seems trivial, but for me it lets me read longer without getting tired.

The Kindle is also light enough that I don't necessarily have to hold it on my lap, when reading sitting up. That's not true of the iPad. It weighs enough that it has to be lap mounted or very quickly your arms feel like there is a elephant hanging off the end.

Books on the Kindle are more expensive than in paperback, but a lot less than hardback. I justified the price of my original Kindle based on the savings due to hardback book costs, and it has already paid for itself.

For an author that might seem sacrilegious, I mean we should be supporting our industry, right? But here's the deal. No matter how much we may or may not want to see the industry moving toward the e-book, it's going to happen. It just a matter of time.

For me, the Kindle has also been quite a boon to my sales. I self published a book a couple years back and it did "OK" in the dead tree version, but the sales of my Kindle version are easily 10X and continuing to climb.

Yes, I am a techno-geek and always one of the first with new gadgets, but the Kindle is one of the ones that I truly use every day.

How about you? Have you made the plunge? When are you going to? because I can tell you, it's not if.
Posted by Douglas L. Perry at 8:00 AM 3 comments: Links to this post

Can Dialog Be Too Fast?


I'm reading a book right now and the first two chapters are basically a Prologue for what is going to happen later. Books from 50 years ago might have had a huge information dump to give all the back story details. Remember, some of those authors were paid by the word.

That doesn't fly with today's readers. In the age of the Internet, you start as close to the end of the story and work your way back, at least that's what we're told.

Seems like good advice. Get the story rocking, get the reader involved and then give them the information dump.

Up until now, I've agreed with this approach, but this latest book has me scratching my head a little. It almost seems too fast.

It could be the author's style, short sentences tend to make the action seem faster. Long ones tend to slow things down. But it seems more than that. The exchanges are so lightning fast between characters that I almost feel like I'm sitting at the center of a tennis match watching the ball go back and forth between players.

Is there such a thing as dialog that's too fast?
Posted by Douglas L. Perry at 8:00 AM 7 comments: Links to this post


If you read writing blogs, you hear over and over about how you need to have tension in your writing. If you attend one of Donald Maas's fabulous seminars, he says the same thing. In fact Donald even goes further and talks about having tension on every page.

I agree a hundred percent.

Tension is what keeps you reading. Tension can help bring out emotion, or in most cases make a situation emotionally stronger.

So how do you do that exactly?

Well you could put a bomb in your protagonists back pocket with a timer set to the end of the book, but that's not really very realistic, is it?

The thing is, the tension doesn't have to be life or death, although that's of course one of the strongest ways to do it. It could be simply that two siblings don't get along and it creates tension because you the reader, care about the fact that they are not getting along.

I'm reading a book right now, where the author has done it a little differently, and it's working very well. It's a variation of the bomb in the back pocket.

One of the main characters is someone you don't want to see hurt, a true patriot, always willing to put it all on the line, someone that we would all like to be, but probably never will. That's not to say that he's perfect, no one is, but he's one of those characters that a lot of us can relate to.

OK, so he's attacked by a group of mercenaries, but they don't kill him, instead, they place what looks like a normal credit card in his wallet. Only this credit card has the ability to transmit his position to the bad guys that attacked him. They are trying to use him to find another person, because our main character thinks like the other person, and will likely anticipate his moves.

It seems pretty easy, and contrived, but I have to say that the author has done a great job of making the reader believe that it could be done, and that the main character has no idea. At least not yet.

The result is that every time I pick up the book, and this character appears, I can picture that card in his wallet, and I can feel the tension for him to find and remove it. It has helped the story immensely.

Of course this technique won't work with most stories, but the idea is not to stick a bomb in every character's pocket, it's to add tension in a way that fits with your story.

Have you read any books lately that used this effectively? How do you add tension?
Posted by Douglas L. Perry at 8:00 AM 2 comments: Links to this post

Been working on a Secret Squirrel Contemporary YA novel for some time now, and today, I am puppy killer.

The main character in the novel is recovering from [redacted]. I researched recovery and the support one receives when Something Bad Happens.

One thing that helps people not feel so helpless is taking care of a pet. So, my main character got a puppy. Two, actually. Boston Terrier puppies. Who can resist the cute face of a Boston? I sure can’t. I get all gooey when my adult Boston looks at me, imagine TWO puppies and a teen girl.

This morning while I was working out trying to tame my writer’s butt (if you don’t know what writer’s butt is, start working out now!), I realized the puppies were not doing it for me because they weren’t doing it for the main character. Her puppy interaction, as she is coming to grips with her new life, was, God forbid, stilted.

How can I have stilted puppies? They are PUPPIES.

What was my main character trying to tell me? What did I miss?

She is pretty. She is vain. She isn’t exactly smart… anymore. She’s punchy, literally. She’s somewhat obsessed with boys. Her boyfriend in particular.

That’s when it hit me. Her boyfriend. He’s part of the experience of how she got to where she is. He’s more than just your run-of-the-mill boyfriend--he’s the personification of strength. Granted, he’s strength with a large side order of hormone, but still. A young man. She loves him.

She loves him… and he’s a fox. Somewhat of a studmuffin, actually.

Um, so what would a girl do with puppies when she has Mr. Charming Fox at her disposal?

Not a damn thing.

This morning, I selected all of the puppy text and deleted it.

I killed the puppies.

I am a puppy killer.

But I did add a great make-out session, so there is that.

Posted by Anthony Pacheco at 12:39 PM 5 comments: Links to this post