The Rookie and Writing 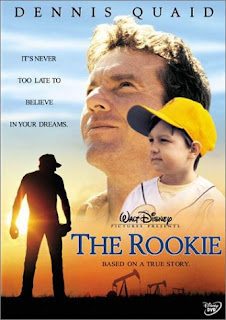 While watching the movie "The Rookie" last night, which by the way I love, I stopped and asked myself why. Why was it so popular, and what about that movie was so powerful?

In case you haven't seen it, it's about a baseball coach in a small town in Texas. His team has some talent, but they lose most of their games. The coach determines that it's because they don't want it enough.

In a pivotal moment he chastises his team for not following their dreams, for not wanting success enough. They fire back with the fact that he has done the same thing. He has a latent talent that would allow him to pitch in the major leagues, but here he is in podunk Texas, coaching a lousy team.

They go on to challenge him. If the team wins the district championship, then he has to go to a major league tryout and pitch. After some soul searching, he agrees.

Of course the team goes on to success, he goes to the tryout, he ends up being hired as a pitcher for the minor leagues, and later ends up in the majors.

Overall it is a feel good movie about "the power of the human spirit".

Why are are these movies so popular?

This isn't the only movie of this type with this theme. Off the top of my head I can think of "The Karate Kid", "The Mighty Ducks", and many others.

What is it about this theme that so captivates the audience? And how realistic is it?

To me the theme is that "if you want it bad enough, you only need to give it your best and you'll get there".

Is that true in every case?

I would say no.

Can every kid who throws a ball become a major league pitcher? No.

Can every person who wants to become president get there? No.

I believe that to truly excel at most things you need to have some latent talent, or as in sports, you need to have the right size, strength, etc. Not everyone can dunk a basketball for instance.

There are activities where you can learn to be the best, though I think writing is not one of them. I believe that it takes a special kind of personality and creativity to be an exceptional writer. Lots of people can learn how to be a good writer, but the truly great ones have a gift.

Do you have that gift?

I don't know? But does it really matter?

Do you think that every one of us has a great novel in us? Probably not, but like that coach, if we settle for what's easy, and not follow our dreams, we'll never know, will we? If we don't strive to be the best, stretch ourselves to the limit, push ourselves farther than we ever thought possible, we'll never reach the potential to be great, will we?

What about you? Are you following your dream? Are you writing the best book can possibly write?
Posted by Douglas L. Perry at 8:00 AM