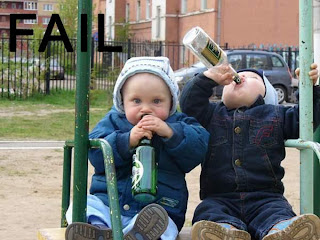 Everyone has parents. Lots of people actually are parents. Therefore its fair to say stories about parenting, or being parents, are easy to relate to. These stories can be tragic, happy, uplifting, but for me the best ones are hilarious. Every parent does something stupid once in a while, and every child has a story about their parent making a mistake. We are all human after all.

Have you ever tapped into these stories, in your work in progress?

I have. In my latest I recount a story about my dad and I on an old wooden boat dock at a small lake in South Dakota. I don't remember how old I was, probably 3 or 4. My father was busy talking to a friend, not really watching me, while I'm sure I was terrorizing the local fishermen.

I still don't remember how it happened, but one moment I was playing on the wooden dock, the next, I was staring at the bright blue sky. Almost immediately after that, my back splashed into the water and I went under. I tried to stand, but it was much too deep, and, I didn't know how to swim. Of course my father jumped in as soon as he understood what happened, but the experience gave me a horrible fear of water that even to this day hasn't completely gone away.

I used that story to give my protagonist an irrational fear of water, and I think it works, mainly because it's from personal experience. I can easily explain the feelings my protagonist has, because they're mine.

I don't blame my dad for the incident. We laugh about it.

From my own experience as a parent I have another one. I haven't used this one yet, but we'll see if I can fit it in one of these days.

My son was about 2, in a car seat in the back of our Ford Explorer, which happened to be stopped at a traffic light facing a major intersection. The light turned green and I was about to pull into the street, when something in my peripheral vision to the right, made me hesitate. A second later a bicyclist shot through the intersection, directly in front of the Explorer, probably missing my front bumper by a foot or so. If I had left on the green light, I would have hit him.

I was angry. This guy had run a major traffic light and nearly caused a serious accident. I thought for sure I would be blamed for the accident, so I did something stupid. I rolled down my window, stuck my head out, and yelled "asshole" at the guy. He, of course, didn't turn around, didn't slow, and ran the next traffic light as well.

As I pulled into the intersection I heard a little voice from the back seat speak. "Asshole."

What about you? Do you use parenting stories?
Posted by Douglas L. Perry at 8:00 AM